Elbow injuries are common, but are not usually serious. The most common elbow injury is tendinitis – an injury to a tendon, such as tennis elbow (which has very little to do with tennis).

The ulnar nerve travels from the neck down into your hand and governs sensation to the little finger, part of the ring finger and power to the small muscles within the hand. Along the way the nerve can get compressed or irritated.

'Cubital Tunnel syndrome' is compression or irritation of the ulnar nerve in a small tunnel that is formed on the inside of the elbow, also known as the medial epicondyle. This space is narrow with little soft tissue to protect it, which makes it vulnerable to compression.

Occurrence/Frequency of Injury
Entrapment of the ulnar nerve is the second most common compressive neuropathy (nerve issue) condition and can occur for a number of reasons such as:

Symptoms arising from this condition include numbness and tingling to the ring and little finger, weak grip, muscle wasting and a feeling that the fingers are asleep.

Treatment and Recovery Timeframes
Recovery rates from ulnar nerve issues are good as most issues arise from people undertaking certain activities that aggravate the nerve e.g. resting on the elbow for long periods, and when these are stopped, symptoms can settle quickly. In the early stages painkillers and anti-inflammatory medication can be taken to help settle the symptoms.

If the issue fails to resolve, physiotherapy can be used to start a stretching and strengthening programme that will reduce the associated symptoms. A patient may also be provided with a splint that encourages correct elbow position and offloads the nerve.

In more severe cases steroid injections may be required and, if this fails, surgery may be suggested. Steroid injections help to reduce the pressure on the ulnar nerve at sites where it has become compressed. Recovery is quick with a return to full function achievable within 1 -2 months.

The most effective way for employers to help manage ulnar nerve issues is to ensure that work stations are ergonomically sound and are not the root cause of the issue. Ensuring regular breaks and role rotation can be an effective preventative measures. If managed effectively time off work is not required, but often the symptoms go unreported until the condition becomes severe.

Interesting Facts
The symptoms of Cubital Tunnel syndrome are very similar to the pain that comes from hitting your funny bone.

Golfer's Elbow, otherwise known as medial epicondylitis or Pitcher's elbow, is a similar condition to Tennis Elbow. However, it affects a different set of muscles arising from the medial epicondyle, the inside of the elbow.

With Golfer's Elbow, the tendon that attaches the flexor muscles to the medial epicondyle becomes inflamed due to repetitive bending and twisting of the forearm, wrist and hand such as those movements made while playing golf.

Occurrence/Frequency of Injury
The most common cause of the injury is overuse with excessive use of the fingers or the wrist causing damage to the tendon.

Repeating the same type of activity over and over again and putting too much strain on the elbow tendons causes it to pull away from where they attach to the bone.

Symptoms include pain on the inside of the elbow, which may then spread down the forearm. Increased tenderness when touched in this area along with pain on bending the wrist, twisting the forearm and grasping objects. Reduced muscle strength may also occur.

Treatment and Recovery Timeframes
More than 90% of cases respond to conservative treatment which involves:

If these steps fail to work, a steroid injection or surgery can be used, but these are not considered until the person has had 6-12 months of continuous symptoms.

Golfer's Elbow is commonly caused by jobs that require repeated forceful movement of the wrist such as computer work. If cases are caught early enough, changes to roles and work stations can be put in place which will prevent the condition worsening.

If Golfer's elbow develops into a severe case, a short period of complete rest and time away from work may be required to help settle the symptoms.

The key for employers is to have robust work practices in place that reduce potential repetitive patterns of work that may lead to the development of Golfer's Elbow.

Interesting Facts
Golfer's Elbow is the most common injury for rock climbers, whose sport is very grip intensive, with lots of repetitive movements of the flexors of the fingers which all insert into the medial epicondyle.

A bursa is a fluid-filled sac that acts as a cushion between muscles, tendons and joints. You often find them at bony prominences such as the elbow, shoulder, hip and knee. Bursitis essentially means the bursa has become inflamed - 'itis' meaning inflammation.

The bursa in the elbow lies over the bony point on the elbow called the olecranon - hence its name Olecranon Bursitis.

It is often quite easy to self diagnose. Because of the location of the bursa, when it is inflamed the swelling remains quite localised and can look like a golf ball on the point of the elbow. This is often characterised by pain, redness, and swelling around the olecranon.

Occurrence/Frequency of Injury
Bursitis can also be caused by trauma, such as landing hard on the elbow.

Alternatively Bursitis can be a result of overuse, rheumatoid arthritis, gout, or infection.

Treatment and Recovery Timeframes
Normally acute instances of bursitis are treated and respond well to conservative treatment such as icing and anti-inflammatory drugs (eg.Ibruprofen).

Bursitis can sometimes go on to become chronic and therefore may require a steroid injection and sometimes even surgery.

The Radial Head Fracture is not common and is often accompanied by shoulder and wrist injuries too.

Occurrence/Frequency of Injury
Radial Head Fractures constitute approximately one third of all elbow fractures. They are most frequently a result of falling on an outstretched hand, as when trying to break a fall by putting your hand out in front of you.

The force from such a fall can travel up the forearm, leading to the broken bone being sustained, and can even lead to a dislocated elbow on occasion. This type of fracture is more common amongst women and those aged between 30 and 40 years old.

- Pain on the outside of the elbow
- Swelling in the elbow joint
- Difficulty bending / straightening the elbow with pain
- Difficulty turning the forearm, palm up or down

Treatment and Recovery Timeframes
The injury is classified by Type I, II, III, depending on the degree of displacement and the size of fracture sustained, or evidence of nerve or vascular involvement. This will determine whether a non-surgical or surgical route for treatment is required.

If severe damage has occurred, pins and screws may be required to stabilise the radial head and in severe cases it might even be removed by surgery.

It is important that elbow movement is started as early as possible and certainly within three weeks following the injury once treated. Physiotherapy being required in most cases before full functional activities can be resumed. The fracture will typically take six weeks to heal but many people find they can move the elbow without pain before this time.

In most cases the elbow will return to normal pain free function within three months of injury.

The simplest of fractures will probably result in some loss of straightening the elbow. The most common ongoing symptom of a Radial Head Fracture is elbow stiffness, with the future likelihood of developing 'wear and tear' arthritis being high.

Interesting Facts
A Radial Head Fracture is one of the most common fractures around the elbow sustained by athletes, particularly those involved with skateboarding and snowboarding.

Tennis Elbow - or lateral elbow pain - occurs when the outer part of the elbow becomes sore and painful.

Occurrence/Frequency of Injury
The elbow joint is surrounded by muscles that move your elbow, wrist and fingers. The tendons in your elbow join the muscles and the bones and control the movemnts of your forearm. Tennis Elbow develops when the tendons become strained and tiny tears and inflammation develop at the lateral epicondyle, where they insert into the bone.

- Pain when the arm is fully stretched
- Tenderness on outside of elbow
- Aching in the elbow region
- Gripping and movements of the wrist may hurt
- Morning stiffness, around the elbow

Treatment and Recovery Timeframes
More than 90% of cases respond to conservative treatment that involves:

If these steps fail to work, a steroid injection or surgery can be used, but are not considered until the person has had 6 -12 months of continuous symptoms.

Tennis Elbow is commonly caused by jobs that require repeated forceful movement of the wrist such as computer work. If cases are caught early enough changes to roles and work stations can be put in place, which will prevent the condition worsening.

If it has developed into a severe case, a short period of complete rest and time away from the work place may be required to settle the symptoms.

The key for employers is to have robust work practices in place that reduce potential repetitive patterns of work that can lead to the development of Tennis Elbow.

Interesting Facts
Only 5% of patients with Tennis Elbow actually play tennis recreationally. But Tim Henman was a player who unfortunately suffered from Tennis Elbow.

There have been reports of Tennis Elbow type injuries being sustained from playing active video games, such as the Wii, PlayStation and Xbox. 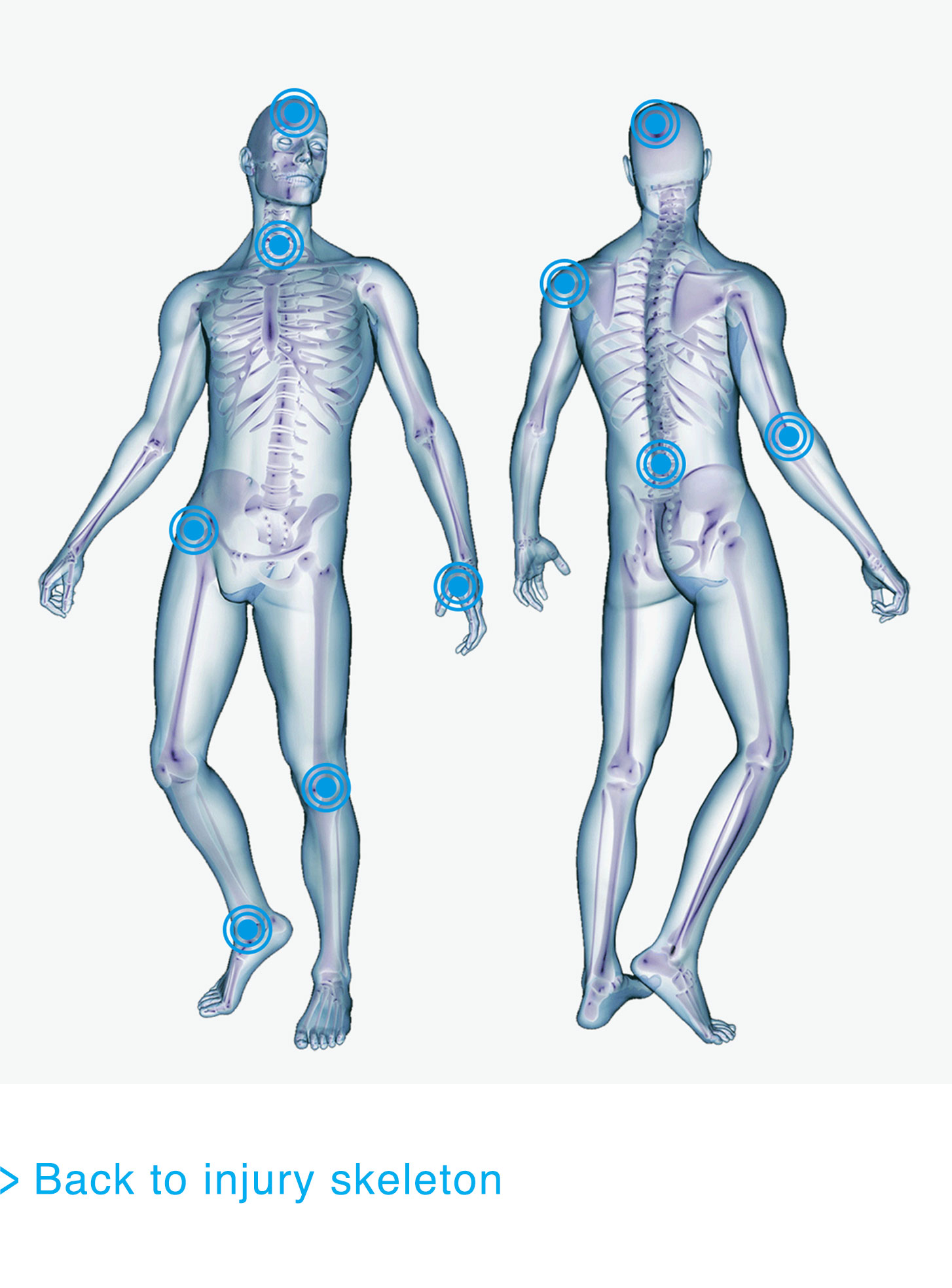